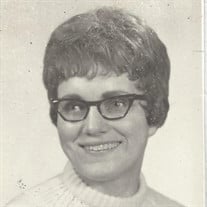 Lynna Kaloupek, 74, of McPherson, went to be with her Lord and Savior on Thursday, June 15, 2017, at McPherson Hospital from complications of a stroke.

Lynna, the daughter of Earling Eugene and Leitha Amy (Easterby) Iverson, was born February 21, 1943, in Aberdeen, SD. She graduated from Milbank (SD) High School in 1961 and attended and graduated from Dakota Wesleyan University, Mitchell, SD, where she met her husband, Leighton Kaloupek. They were united in marriage on August 21, 1966, at the Methodist Church in Milbank. They have made their home in Mitchell, SD, E Grand Forks, MN, Humeston, IA, and McPherson, KS.

She taught PE and business classes for a year in Minnesota and another year in South Dakota. Ten months after their wedding, she became very ill and was hospitalized for eight weeks. She has overcome various other conditions since then that have limited her to part-time and volunteer work. Her last work was at Memorial Hospital, working at the front desk.

Lynna’s number one priority was family. She attended every activity of her children that was possible and supported her husband as a teacher and coach. Her second love was to be with Leighton doing the jitterbug. Her highlight came when dancing at the Surf Ballroom, but that’s now diminished because she’s dancing IN the stars. She also enjoyed helping young children in church activities as long as her health allowed, and she continued to grow in her faith until slowed by health problems.

Lynna is survived by: her husband of 50 years, Leighton; a daughter, Laurie (Jared) Rand of Berryton, KS and their three children, Taylor, Tristen, and Trevor; a son, John (Angela) Kaloupek of Lenexa, KS and their three children, Hannah, Evan, and Zane; two sisters, Sally (Pat) Mertens of Aberdeen, SD and Vickie (Steve) Munderloh of Mobile, AL. She was preceded in death by her parents.

A luncheon will follow the Celebration Service on Saturday and memorial donations may be given to the First Baptist Church to help less fortunate children pay their way to summer camps in care of Stockham Family Funeral Home, 205 North Chestnut, McPherson, KS 67460. To send flowers or a memorial gift to the family of Lynna K. Kaloupek please visit our Sympathy Store.

To send flowers to the family in memory of Lynna K. Kaloupek, please visit our flower store.
Send a Sympathy Card