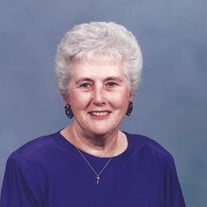 Lucile A. Stacy Dalke, 94, of Hutchinson, KS and formerly of McPherson and Kansas City, passed away peacefully on Saturday, August 31, 2019, at Legend Senior Living in Hutchinson. Lucile had worked for Kansas Department of Social and Rehabilitation Service as an Administrative Assistant for 27 years before retiring in 1989.

She was born September 22, 1924, in Arkansas City, KS, the daughter of David C. and Margaret E. (Foley) Richardson. She attended school in Arkansas City and graduated from high school in 1942. She later attended Southwestern College in Winfield, Kansas.

Lucile was a member of First Baptist Church, Memorial Hospital Auxiliary, VFW Auxiliary (Life Member) and Oriental Chapter #58 of the Order of the Eastern Star.

She was preceded in death by her parents, husbands, and brother, John Richardson.

A graveside service will be held at 2:00 PM, Wednesday, September 4, 2019, at McPherson Cemetery with Pastor John Pattison officiating.

Memorials donations may be given to First Baptist Church of McPherson, Boys and Girls Club of Hutchinson, or Hospice & Homecare of Reno County in care of Stockham Family Funeral Home, 205 N. Chestnut, McPherson, KS 67460. To send flowers or a memorial gift to the family of Lucile A. Dalke please visit our Sympathy Store.

To send flowers to the family in memory of Lucile A. Dalke, please visit our flower store.