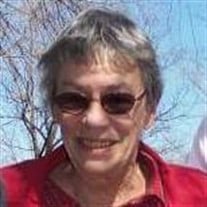 Linda was born on December 11, 1940, in Idaho Falls, ID, the daughter of Donovan and Ruby (Sperry) Swank. She graduated from Mount Hope High School in 1959 and attended Hutchinson Community College. On September 10, 1984, Linda was united in marriage to Glenn D. Becker in Pueblo, CO. He preceded her in death on October 29, 2000.

She was active in several sewing and quilting clubs.

A private inurnment will be held at McPherson Cemetery.

Memorial donations may be given to Bentley Eagle Senior Center in care of Stockham Family Funeral Home, 205 North Chestnut, McPherson, KS 67460. To send flowers or a memorial gift to the family of Linda J. Becker please visit our Sympathy Store.

To send flowers to the family in memory of Linda J. Becker, please visit our flower store.
Send a Sympathy Card