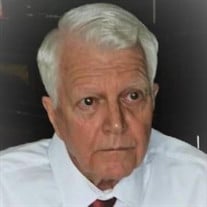 LeRoy W. Johnston passed away on Saturday, January 29, 2022, at Garden Terrace in Overland Park, Kansas.  Leroy was 80.  He spent his last ten years requiring full-time nursing care due to Alzheimer’s/Dementia.  Prior to the nursing home, he lived in Park City, Hays, and the majority of his life, in McPherson, KS.

LeRoy was born near Coldwater, KS in 1941. The family made their way to McPherson.  His father, Harold Johnston, was a teacher and coached basketball.  LeRoy graduated from McPherson High School.  He attended welding school and married Betty Nelson when both were in their early 20’s.  He adopted Betty’s three sons, Richard (Vickie) of Wichita, KS, Marty Olathe, KS, and Troy (Connie) of The Woodlands, TX, and later had a daughter with Betty, Michelle (Robert Alexander) of Kansas City, MO.  The marriage ended in 1983.  He has a brother, Charles, who lives in Downers Grove, IL.  He also leaves behind nine grandchildren, twelve great-grandchildren, two nieces and their families, and former wife, Betty Wait of Buckner, MO.  LeRoy is preceded in death by his parents, Harold and Marie Johnston.

LeRoy earned a living in his younger years as a welder but ultimately lost a good part of his hearing and endured back problems.  He then worked for periods of time at Certain Teed, Swick-Guth, RC Williams Oil company and for many years, at Wichita Kenworth until his cognitive decline.  He enjoyed building things and driving big rigs and heavy equipment.  He was a licensed pilot with instrument rating as well.  LeRoy enjoyed driving around on Sundays, watching TV and a big bowl of popcorn with a glass of cold milk.  He often spent weekends helping others with projects or earning some extra money by creating/welding motorcycle trailers.  He seemed to always find projects but also enjoyed boating and camping.  When he lived in McPherson, he was a member of Trinity Lutheran Church.

Services will be private and his final resting place will be next to his parents at McPherson Cemetery.

In lieu of flowers, memorial donations may be given to the Alzheimer’s Association in care of Stockham Family Funeral Home, 205 North Chestnut, McPherson, KS 67460.

To send flowers to the family in memory of LeRoy W. Johnston, please visit our flower store.
Send a Sympathy Card