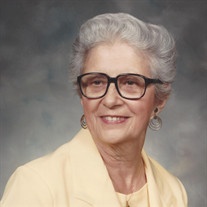 LeAnna F. Royce-Moller-Little, 104, of McPherson, KS and formerly of Sun City, AZ, passed away Sunday, October 29, 2017, at The Cedars in McPherson. She was a homemaker and had also worked in Lawrence, KS for an IGA Grocery Store as a cashier and in the bakery.

She was born March 26, 1913, in Green City, Missouri, the daughter of Fred J. and Lottie J. (Howe) Hein. She spent her younger years in McPherson and attended McPherson High School. LeAnna was a longtime member of First United Methodist Church, McPherson.

Survivors include: a sister, Hazel Bagley and five nieces. In addition to her parents and three husbands, LeAnna was preceded in death by three sisters, Jean Arnn, Joan Kappel, and Pat Homsey.

A graveside service will be held at 9:00 AM Thursday, November 2, 2017 at McPherson Cemetery. There will be no visitation.

Memorial donations may be given to First United Methodist Church in care of Stockham Family Funeral Home, 205 N. Chestnut, McPherson, KS 67460. To send flowers or a memorial gift to the family of LeAnna Moller Little please visit our Sympathy Store.

To send flowers to the family in memory of LeAnna Moller Little, please visit our flower store.