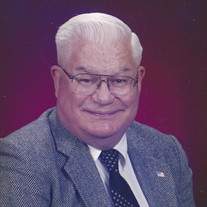 He was born January 2, 1938, near Big Cabin, Oklahoma, the son of George Washington and Lena McKinney. They preceded him in death as did a son Brent, a sister Leoda McKinney Ellsworth, his brothers-in-law George Ellsworth and Irvin Decker, as well as nephew Robbie Ellsworth.

He worked in various positions in central Kansas before his nearly three decade professional career with IBM in which he worked in and around Wichita and McPherson. Lawrence was a member and leader of First United Methodist Church in McPherson, KS. Over the years, he was an active volunteer with the various church activities, the American Red Cross, Boy Scouts of America, local Kiwanis, the Census Bureau, McPherson Convention and Visitor Bureau, and Meals on Wheels. He and his family enjoyed travels and camping across much of this great nation, was an avid fisherman, videographer, skilled horseshoe tosser, a gardener, a coin collector, dedicated Sunday School teacher and most of all, a Bible scholar. He particularly relished being around his grandchildren in whatever they were doing.

Memorial donations may be given to the First United Methodist Church or Kindred Hospice in care of Stockham Family Funeral Home, 205 N. Chestnut, McPherson, KS 67460. To send flowers or a memorial gift to the family of Lawrence D. McKinney please visit our Sympathy Store.

To send flowers to the family in memory of Lawrence D. McKinney, please visit our flower store.