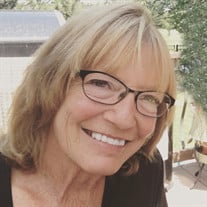 Laurie Ann Jones, 64, of McPherson, KS, passed away peacefully on Monday, September 10, 2018, surrounded by family at her home.

Laurie was born on August 29, 1954, in Douglas, WY. She graduated from Douglas High School. From Douglas, WY, she moved to McPherson, KS, where she worked at Sierra Mobile Homes where she met Leland DeWild. This marriage was blessed with daughters, Amy and Jenny. She then managed Great Plains Credit Union. Later, she met and married Mike Jones and moved to Oklahoma where she enjoyed working on a ranch. Through this marriage, she gained two sons, Tim and Brian.

She was a member of the First Christian Church and Chapter Xi Iota Epsilon of Beta Sigma Phi.

She was preceded in death by her parents, Harold Carothers, Josephine Martin, Harold Martin, and Robert McIntyre and brothers, Chuck Carothers, Scott McIntyre, and Ed McIntyre.

The funeral service will be held at 10:30 AM, Monday, September 17, 2018, at the First Christian Church. Visitation will be held from 9:30 AM until service time, Monday, at the church. Burial will follow the service at McPherson Cemetery.

Memorial donations may be given to Good Shepherd Hospice, American Diabetes Assn., or the Leukemia and Lymphoma Society in care of Stockham Family Funeral Home, 205 North Chestnut, McPherson, KS 67460. To send flowers or a memorial gift to the family of Laurie Ann Jones please visit our Sympathy Store.

To send flowers to the family in memory of Laurie Ann Jones, please visit our flower store.
Send a Sympathy Card