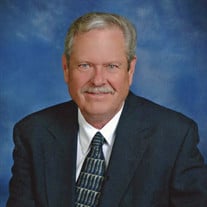 Larry Dean Hamler, 69, of McPherson, Kansas, passed away on Sunday, December 3, 2017, surrounded by his family. Larry was born in McCook, Nebraska, on June 29, 1948, to Frances and Roberta (Blake) Hamler. He attended McCook High School as well as McCook Community College. He married Lana Farmer in 1967, and they had three children. She preceded him in death on January 5, 1995. On December 27, 1997, he married Marilyn (Koehn) Shaft in McPherson, KS.

Larry retired from Central Plastics in McPherson in January 2013, where he was the sales manager. He was also the sales manager for Graves Truckline in Salina, KS, ANR in Columbia, MO, and TRW in McCook, NE. Larry was the former president of Lions Club in Inman, and was instrumental in organizing the children’s fishing derby. Larry enjoyed golf, fishing, spending time outdoors, and he was a gifted artist and sculptor. He also was active in his community and volunteered for Relay for Life. Larry always had a smile, kind words for others, and never met a stranger. He will be greatly missed.

Visitation will be on Wednesday, December 6, at Stockham Family Funeral Home, McPherson, from 3-7pm, with family receiving guests from 5-7pm. Funeral service will be Thursday, December 7, at First Christian Church, McPherson, at 10:30am, and will be followed by graveside service at New Gottland Lutheran Cemetery.

In lieu of flowers, memorials may be given to Relay For Life of McPherson or Inman Lions Club in care of Stockham Family Funeral Home, 205 North Chestnut, McPherson, KS 67460. To send flowers or a memorial gift to the family of Larry D. Hamler please visit our Sympathy Store.

To send flowers to the family in memory of Larry D. Hamler, please visit our flower store.
Send a Sympathy Card