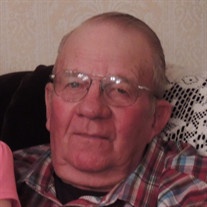 Kent Anderson, 73, of Galva, passed away Tuesday, December 30, 2014, in rural Canton, KS. He was an oilfield pumper and producer and owned and operated Anderson Oil Company.

He was born August 20, 1941, in McPherson, Kansas, the son of Johnnie Maynard and Blanche Lucile (Ferris) Anderson. He graduated from Galva High School in 1959.

On September 2, 1961, he married Sharron M. Anderson in McPherson. He later married Cindy L. Wiederstein on November 6, 1982, in Lincolnville, KS.

The funeral service will be at 10:00 AM, Saturday, January 3, 2015, at First United Methodist Church in McPherson. Burial will be in McPherson Cemetery. Visitation will be from 3:00 to 7:00 PM Friday at Stockham Family Funeral Home, with the family receiving friends from 5:00 to 7:00 PM.

To send flowers to the family in memory of Kent Anderson, please visit our flower store.
Send a Sympathy Card