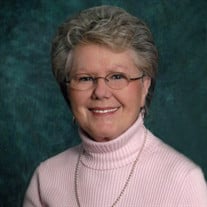 June Bacon, 78, of McPherson, passed away peacefully on Wednesday, March 23, 2016, surrounded by her family at Hospice House, Hutchinson, KS. She was a retired school teacher, teaching third grade at Roosevelt Elementary School in McPherson.

Treva June was born on December 18, 1937, in Norman, OK, the daughter of Roy Laurence and Minnie Bell (Erickson) Gill. She graduated from Central Academy and Central College, both of McPherson, and Greenville College in Greenville, IL. On June 27, 1959, June was united in marriage to Dean R. Bacon in McPherson. He preceded her in death on July 8, 2011.

She was preceded in death by her parents, husband, two sisters, Dorothy Kegin and Anita Cox, and brother, Leon Gill.

The memorial service will be held at 10:30 AM, Friday, April 1, 2016, at McPherson Free Methodist Church with Rev. Tom Griffith officiating. Per June’s request, her body was bequeathed to K.U. Medical School. Inurnment will take place at the McPherson Cemetery at a later date.

Memorial donations may be given to Central Christian College Sports Complex Campaign or Hospice House of Hutchinson in care of Stockham Family Funeral Home, 205 North Chestnut, McPherson, KS 67460. To send flowers or a memorial gift to the family of June Bacon please visit our Sympathy Store.

To send flowers to the family in memory of June Bacon, please visit our flower store.
Send a Sympathy Card