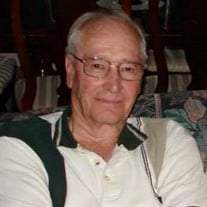 John Kenyon Ward was born on the family farm in rural Custer County, Nebraska on July 1, 1927, to James A. and Ethel (Kenyon) Ward. The youngest of four children, along with Dean, Duane, and Idabelle, he graduated from Litchfield High School in 1944. After the death of his father due to a farm accident, he assumed management of the farm while his brothers were serving in the U.S. Navy. In 1946, he entered McPherson College, graduating in 1950. While attending McPherson College, he and his brother, Dean, owned custom wheat harvesting equipment and followed the wheat harvest for three summers. During the Korean War, John served as a cryptographic technician for the Korean Military Advisory Group.

His many varied interests included photography, leather work, woodwork, writing, and a variety of volunteer activities including serving three terms in the Kansas Silver Haired Legislature. He was active in sports, participating or coaching in whatever sport was in season.

John loved the outdoors and considered service to others to be the highest calling.

John entered into eternal rest on Wednesday, April 22, 2015, at The Cedars Courts, McPherson. He was eighty-seven.

He was preceded in death by his parents, brothers, Dean and Duane Ward, and sister, Idabelle Parsons.

A memorial service will be held at 11:00 AM, Tuesday, May 26, 2015, at McPherson Church of the Brethren with Rev. Chris Whitacre officiating. Inurnment will take place in McPherson Cemetery at a later date.

In lieu of flowers, memorial donations may be given to Heifer Project International or McPherson County Food Bank in care of Stockham Family Funeral Home, 205 North Chestnut, McPherson, KS 67460. To send flowers or a memorial gift to the family of John K. Ward please visit our Sympathy Store.

To send flowers to the family in memory of John K. Ward, please visit our flower store.