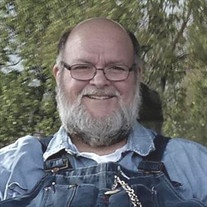 John Ray Snell passed away peacefully in his sleep on the morning of April 2, 2018 in his home. He was born September 25, 1951 in Santa Ana, CA to Arthur and Hazel Snell, and attended public school there. He met and married Lisa Hanawalt on July 6, 1974. After marriage, they moved to McPherson, KS, where he graduated from McPherson College with a Religion/Philosophy degree in 1978.

John’s interest in music and talent as a guitarist led him into his career as a luthier. After a few years of learning instrument repair and practicing out of their basements, he and his college chum, Bruce Kitzel, opened Belli Bros. Music in 1980 in a small house on Kansas St. The business grew and was moved to Ash Street, where the Mark Leaf Case Company was added to the operation. Eventually, the storefront moved to S. Main and was renamed Belli Bros. Music & Trains after John’s lifelong hobby of model trains became part of the business. He and friend Larry Kitzel built an HO and N-scale layout in the basement—the third largest in Kansas at the time—that was open to the public. In 2006, John closed the retail store and moved the repair business to his home.

Service was an important part of John’s life. He was a conscientious objector and volunteered from 1971–1973 for Brethren Volunteer Service. Later in life, he served on the board of the McPherson Museum. He was a long-time volunteer at the Abilene & Smoky Valley Railroad, where he conducted trains, served on the board, trained volunteers in safety, and eventually became an engineer. After the death of his first wife, he met and married Carol Wedel on December 7, 2013. They enjoyed almost five years of companionship and volunteered together at the A&SV Railroad. His family will remember him for so many things: his kindness, his gentleness, his honesty, his wit, his curiosity, his big heart, his beautiful voice, his twinkling eyes, and his legendary overalls. He was a man of few words, but his actions spoke clearly of the quality of his character.

A celebration of John’s life is planned at the McPherson Museum on Sunday, April 8th, from 2-4 p.m. All are welcome to drop in, sing a tune, or share memories. The family has asked that in lieu of flowers, memorial donations may be made in John’s name to the McPherson Museum or the Abilene & Smoky Valley Railroad. To send flowers or a memorial gift to the family of John R. Snell please visit our Sympathy Store.

To send flowers to the family in memory of John R. Snell, please visit our flower store.