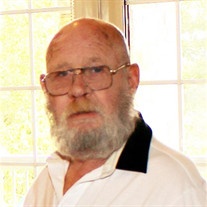 James “Jim” Lee Wolf, 81, of McPherson, KS, passed away peacefully on Saturday, December 29, 2018, surrounded by family at McPherson Health & Rehab. He was a pipeline welder for Mid America Pipeline Co. and was a line locater for Industrial Electric/Piping Technology.

Jim was born on February 8, 1937, in Glasco, KS, the son of Walter Elmer and Juanita Mae (McGaughey) Wolf. He attended Glasco High School. Jim was united in marriage to Elda Louise Lavy on July 25, 1959, in Eureka, KS. Elda preceded Jim in death on December 5, 2014.

He was a United States Navy Veteran and was a member of the Bohemian Hall in Simpson, KS.

He was preceded in death by: his parents; wife; daughters, Lynn Wolf and Elda Wolf; brothers, Squeak Wolf and Dick Wolf; and grandsons, Allen Wolf, Austin Wolf, and Jacob Setzer.

A graveside service with Military Honors will be held at 10:30 AM, Saturday, January 12, 2019, at the McPherson Cemetery.

In lieu of flowers, memorial donations may be given to Kansas Honor Flights or Kindred Hospice in care of Stockham Family Funeral Home, 205 North Chestnut, McPherson, KS 67460. To send flowers or a memorial gift to the family of Jim L. Wolf please visit our Sympathy Store.

To send flowers to the family in memory of Jim L. Wolf, please visit our flower store.