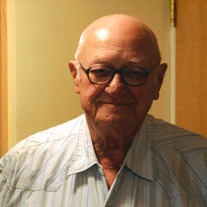 Jim James Wiederstein, 84, of McPherson, passed away on Sunday, July 6, 2014, at McPherson Hospital. He formerly lived in Marion, El Dorado, and Galva. Jim had been an oil field worker and refinery worker.

Jim was born on November 22, 1929, in Galva, KS, the son of Albert and Elizabeth (Goertz) Wiederstein.

He served in the United States Army during the Korean War and was a member of the El Dorado American Legion and El Dorado V.F.W.

He was preceded in death by his parents, three sisters, Minnie Davis, Helen Crane, and Edna Rucker.

Memorial donations may be given to the American Legion Riders Chapter #24, McPherson in care of Stockham Family Funeral Home, 205 North Chestnut, McPherson, KS 67460. To send flowers or a memorial gift to the family of Jim J. Wiederstein please visit our Sympathy Store.

To send flowers to the family in memory of Jim J. Wiederstein, please visit our flower store.