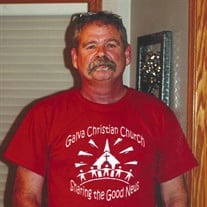 Jerry Brian Robertson, son of Jay Byron and Kathern Sue (Geren) Robertson, was born June 10, 1960, in McPherson, Kansas. He attended McPherson schools and graduated from McPherson High School in 1978. In high school, he was in theater musicals including Brigadoon and Oklahoma. He was passionate about music...all genres and styles, except for hip-hop. After graduation, Jerry attended Friends University in Wichita.

Jerry was united in marriage to his high school sweetheart, Teresa A. McDonald, on August 29, 1980, in McPherson, KS. This marriage was blessed with the birth of two daughters, Jennifer and Jordan. Jerry and Teresa raised their daughters to become strong independent women. Teresa preceded Jerry in death on November 4, 2005. He was also preceded in death by his father, Jay, and brother, Jeff.

Jerry spent most of his working years in the construction business as brick layer and carpenter, with Pyle Construction and Gilbert Construction. His talent as a carpenter and brick layer was widely known, having worked on projects like the Warren Building, Peoples Bank, the Red Coach Inn in Wichita, and many more. He also constructed the emblem on front of Galva Christian Church.

Jerry attended the First Baptist Church in McPherson and sang in the Sonshine Singing Group. After moving to Galva, he attended the Galva Christian Church.

He was never a man of many words and believed that a quiet voice could make a larger impact than yelling. He was usually quick with a joke or riddle and always friendly and kind to others. One could say he was very "hail-fellow-well-met." He was very generous with gifts and money, and since he lived near a baseball diamond, he often gifted his grandkids with the baseballs found in his yard. Jerry loved watching his grandkids play and occasionally would join in. He was known to be horrible speller and did slow, one-finger typing on the computer. He never would get a smart phone because he believed "a device shouldn't be smarter than its owner."

Many will recall Jerry as an excellent cook, utilizing recipes passed from church or prior generations. He always made "big meals" on weekends but also enjoyed ordering Pizza Hut pizza occasionally and kicking up his feet up instead of cooking. Pizza and movie nights were weekly events growing up. He was quite the movie buff and took pleasure in watching movies like Blazing Saddles, Blues Brothers, and quoting lines from them. He also liked episodic comedies and dramas on TV such as Monk, Pysch, and Criminal Minds. Jerry also enjoyed video (PS2) games like Tiger Woods golf, bowling, and pinball. The KC Chiefs were his favorite team, and he was overjoyed when he got to see them make it back to the Superbowl! He loved other sports, too, such as Nascar, and his favorite driver was Jeff Gordon. Every year in May, Jerry made it a point to attend the All-Schools Day Parade and especially loved the bands and classic cars.

Jerry entered peacefully into eternal rest on Saturday, May 8, 2021, at his home in McPherson. He was sixty.

The family will receive friends from 5:00 PM to 7:00 PM, Monday, May 17, 2021, at Stockham Family Funeral Home. The funeral service will be held at 10:00 AM, on Tuesday, May 18, at the Galva Christian Church with Pastor Tripp Edwards officiating. Burial will follow at McPherson Cemetery. To view a livestream broadcast of the memorial service on the Galva Christian Church YouTube channel, please click on this link: https://www.youtube.com/channel/UCrnijBNttliikyA9dHJY0eA/videos

Memorial donations may be given to the Galva Christian Church or American Cancer Society in care of Stockham Family Funeral Home, 205 North Chestnut, McPherson, KS 67460. To send flowers or a memorial gift to the family of Jerry B. Robertson please visit our Sympathy Store.

To send flowers to the family in memory of Jerry B. Robertson, please visit our flower store.