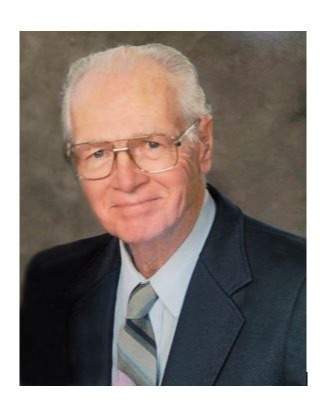 Jerome “Jerry” Leonard Land was born on October 2, 1933, at the home of his grandmother in Juniata, NE to Charles L. and Josephine L. (Fifield) Land. After graduating high school in Omaha in 1952, he joined the army and served during the Korean war, stationed in Germany. He attended college and graduated with a degree in draftsmanship after which he went to work for the Metropolitan Water District in Los Angeles.

In 1958, he married Jacqueline Strahan in San Bernardino, CA, adopting her son, Steve. The couple had two more children, Linda and Todd.

He married Ruth Potter Black Milliken on April 13, 1991, at Clark, NV. They lived at several locations in California where Jerry owned a pest control business, The Fly Guy. He was always a diligent and conscientious worker and a savvy business owner.

After retirement, he and Ruth moved to Moundridge, KS, and later to McPherson, KS, to be near family. Jerry was an expert woodworker and made many beautiful pieces of furniture for his and Ruth’s home as well as making gifts for family members. He and Ruth always had a beautiful home, and they enjoyed sharing it with family, especially on the 4th of July holiday when there was usually a cookout and fireworks. Jerry enjoyed being around the extended family and celebrating many holidays with 3-4 generations. Jerry and Ruth attended McPherson Free Methodist Church and more recently, Cornerstone Bible Church.

Jerome Leonard Land passed into eternity on Tuesday, November 8, 2022, at Hospice House, Hutchinson, after several years of declining health. He was eighty-nine.

A memorial service will take place at Stockham Family Funeral Home in McPherson at 11:00 AM, on Friday, November 18, 2022, with Rev. Tom Mayse officiating.  Burial with Military Honors will follow at McPherson Cemetery.  To view a livestream broadcast of the service, please click on the following link: https://evt.live/memorial-service-for-jerome-l-jerry-land

To send flowers to the family in memory of Jerome "Jerry" L. Land, please visit our flower store.