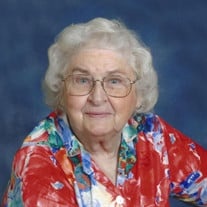 At the age of 94, so many of her family and friends had died including her husband, Dean. She was ready to be reunited with them and to see Jesus.

Johnnie was born February 1, 1926, in Cocoa, Florida to Myron and Myra Harsha. She had two siblings, Edith (Harsha) Carthel (John) and George Harsha (Mae), both deceased.

She met her husband, Irwin Dean Addington, who was in the Navy at the time at the USO in Cocoa. Johnnie rode a troop train from Florida to California for five days to meet Dean and marry him August 13, 1945, in Alameda, California. This was the day before World War II ended. What a celebration! They were married 50 years. Dean died in 1996. Dean and Johnnie had many adventures and stories to tell.

Johnnie worked in the medical field much of her adult life earning her LPN at age 56. Her favorite field was geriatrics and nursing homes.

Johnnie was a strong, independent woman who didn’t let widowhood stop her from doing what she wanted to do. She took her camper and dog and traveled in the Northwest, Arizona, and New Mexico. She drove her camper to all of her grandchildren’s graduations in McPherson and one in Arkansas.

Her memorial service will be at St. Philip’s Episcopal Church, Belen, New Mexico at a later date.

Memorial donations may be given to the Salvation Army in care of Stockham Family Funeral Home, 205 North Chestnut, McPherson, KS 67460. To send flowers or a memorial gift to the family of Janell P. Addington please visit our Sympathy Store.

To send flowers to the family in memory of Janell P. Addington, please visit our flower store.