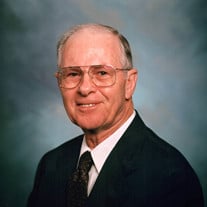 Jim was a member of McPherson Church of the Brethren and Telephone Pioneers. He was a former member of First Baptist Churches of McPherson and Salina.

He was preceded in death by his parents; first wife; three brothers; and three sisters.

The memorial service will be at 11:00 AM, Saturday, October 8, 2016, at The Cedars Conference Center, McPherson with Rev. Chris Whitacre and Rev. Kathryn Whitacre officiating. Inurnment will be in the McPherson Cemetery at a later date. In accordance with Jim’s wishes, his body was donated to the University of Kansas School of Medicine.

Memorial donations may be given to a charity of the donor’s choice in care of Stockham Family Funeral Home, 205 North Chestnut, McPherson, KS 67460. To send flowers or a memorial gift to the family of James A. Wiseman please visit our Sympathy Store.

To send flowers to the family in memory of James A. Wiseman, please visit our flower store.
Send a Sympathy Card