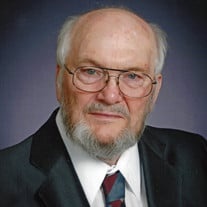 James “Jim” Franklin Graham, Sr., 85, of McPherson, KS, passed away peacefully on Friday, March 22, 2019, surrounded by family at The Cedars, McPherson. He was a retired rigger at National Cooperative Refinery Association (NCRA).

Jim was born on August 7, 1933, in Waukesha, WI, the son of William Franklin and Viola Mae (Mickel) Graham. He graduated from high school in Waukesha, WI. Jim was united in marriage to Donna JoAnn Nikkel on October 14, 1955, in McPherson, KS.

Jim was a veteran of the United State Air Force, serving during the Korean War. He was a Life Member of V.F.W. Post #2715 and served as Past State Commander of the V.F.W. He was also a member of the American Legion Post #24.

He was a member of the First United Methodist Church where he was in the Partners in Christ Sunday School Class. He was also a member of United Methodist Men, Noon Kiwanis Club, Masonic Lodge #172, and former members of the Isis Shrine and Jaycees. He also volunteered for the McPherson Hospital Auxiliary.

He was preceded in death by his parents, brother, William Graham, Jr., and sister, Ellen Jackson.

Visitation will be held from 3:00 PM to 7:00 PM, Thursday, March 28, 2019, at Stockham Family Funeral Home with family receiving friends from 5:00 PM to 7:00 PM. The funeral service will be at 10:30 AM, Friday, March 29, at First United Methodist Church with Rev. Karen Rice Ratzlaff officiating. Burial with Military Honors will follow at McPherson Cemetery.

Memorial donations may be given to Veterans of Foreign Wars or Partners in Christ Sunday School Class at First United Methodist Church in care of Stockham Family Funeral Home, 205 North Chestnut, McPherson, KS 67460. To send flowers or a memorial gift to the family of James F. Graham Sr. please visit our Sympathy Store.

To send flowers to the family in memory of James F. Graham Sr., please visit our flower store.