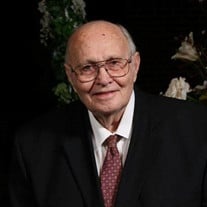 James T. Branam, Jr., 89, of McPherson and formerly of Orlando, Florida, went home to his Lord on Saturday, January 10, 2015, at his home in McPherson. He had been a McPherson resident since 2012 and was retired from Eastern Airlines where he had worked for 38 years as a site manager in Chattanooga, TN and as a chief ticket agent in Orlando, FL.

During World War II, James enlisted in the U.S Navy and was honorably discharged in June 1946.

He received a Bachelor’s Degree in Business Administration from the University of Georgia in 1950.

\He was preceded in death by a sister, Evelyn Howard.

Celebration of Life will be held at 4:00 PM on Thursday, January 15 at Calvary Baptist Church in McPherson. The family will receive friends from 3:00 PM until service time on Thursday at the church. Burial will be at the Woodlawn Cemetery in Orlando, Florida on January 22.

Memorial donations may be given to the Calvary Baptist Church Benevolence Fund in care of Stockham Family Funeral Home, 205 N. Chestnut, McPherson, KS 67460. To send flowers or a memorial gift to the family of James T. Branam, Jr. please visit our Sympathy Store.

To send flowers to the family in memory of James T. Branam, Jr., please visit our flower store.