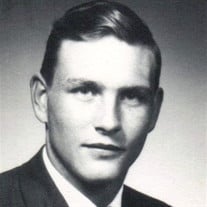 Ivan Lee Jorgensen, 67, of McPherson, KS and formerly of Red Cloud, NE, passed away peacefully on Thursday, January 4, 2018, surrounded by family at his home in McPherson. He was a farmer and served in the National Guard.

Ivan was born on October 16, 1950, in Red Cloud, NE, the son of LeRoy Ernest and Alice Elizabeth (Rabb) Jorgensen. He graduated from high school in Lebanon, KS. On December 27, 1969, Ivan was united in marriage to Patti L. VanWey in Smith Center, KS.

Survivors include: wife, Patti of the home; children, Mickie Jorgensen of Smith Center, KS, Marcy Bridwell and fiancé, Jason Smith, of Galva, KS, and Mindy Komarek and husband, Adam, of McPherson, KS; three grandchildren, Cody Bridwell, Lynly Bridwell, and Michael Jorgensen; and one grandson to be born in May.

He was preceded in death by: his parents; a brother, Ernest Wayne Jorgensen; and sister, Teresa Harris.

A private service will be held at a later date at Womer Cemetery, Womer, KS. Cards may be sent to the family at Stockham Family Funeral Home, 205 North Chestnut, McPherson, KS 67460. To send flowers or a memorial gift to the family of Ivan Lee Jorgensen please visit our Sympathy Store.

To send flowers to the family in memory of Ivan Lee Jorgensen, please visit our flower store.