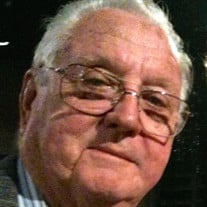 Howard Leon Johnson, 88, of Pharr, Texas died peacefully on Thursday, November 27, 2014, (Thanksgiving Day) after a brief illness. He was born in McPherson, Kansas on May 23, 1926, the son of Allen Belmont and Violet Zenobia (Hefling) Johnson.

Howard and Virginia traveled extensively throughout their lives. Howard worked for Italian Swiss Colony Wines and McCormick Distillery before taking off on his own. He raised Charolais cattle, and was the President of both the American Charolais Association and the International Charolais Association. He had a trailer manufacturing business before eventually retiring in Pharr, Texas.

Survivors include: his wife, Virginia of Pharr, Texas; his daughter and son-in-law, Vickie and Scott Beck of Woodstock, Maryland; his brother and sister-in-law, Willie and Evie Johnson of McPherson, Kansas; his sister-in -law, Dollie Johnson of Rockvale, Tennessee; his grandchildren and their spouses, Heather Beck and Shawn Kettering of Ellicott City, Maryland; Sara Beck and Park Chisolm of Nashville, Tennessee; Daryl and Amy Irsik of Kearney, Missouri; and four great-grandchildren, with another on the way.

Howard was preceded in death by a son, Ronald G. Johnson.

The funeral service will be held at 10:30 AM on Thursday, December 4th, at Stockham Family Funeral Home. Inurnment will be in McPherson Cemetery. There will be no visitation.

Memorial donations may be made to Amara Hospice in memory of Howard Johnson at www.AmaraHospice.com or in care of Stockham Family Funeral Home. To send flowers or a memorial gift to the family of Howard L. Johnson please visit our Sympathy Store.

To send flowers to the family in memory of Howard L. Johnson, please visit our flower store.