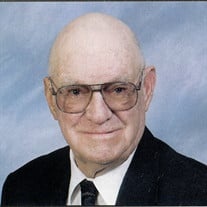 Herbert O. McClain, 92, of McPherson, passed away peacefully on Wednesday, September 10, 2014, at The Cedars, McPherson. He was a retired farmer and had worked for the City of McPherson Street Department. After retirement, he drove cars for Midway Motors and delivered parts for Prairieland Partners.

He was a member of First United Methodist Church and B.P.O.E. 502.

He was preceded in death by his parents, wives, and sister, Florence Crow.

Memorial donations may be given to First United Methodist Church or Hospice of Reno County in care of Stockham Family Funeral Home, 205 North Chestnut, McPherson, KS 67460. To send flowers or a memorial gift to the family of Herbert O. McClain please visit our Sympathy Store.

To send flowers to the family in memory of Herbert O. McClain, please visit our flower store.
Send a Sympathy Card