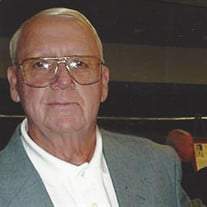 Clinton was born on May 14, 1929, to Matthew Ebeneezer Brown and Gladys Wealthy Cramblett Brown in Spearville, Kansas. From an early age, Clinton loved sports of all kinds and he used his athletic abilities to earn a basketball scholarship at Pittsburg State University after graduating from Lewis High School. During his senior year, Clinton married his sweetheart, Donna Sims, and they remained inseparable together for the next 64 years - except for the year he spent serving his country in the Korean War.

Upon returning from Korea, Clinton earned his Master’s Degree from the University of Iowa in 1954, and then began a career in education at Minneola, Kansas, which was Donna's home town. During his 35 years as a teacher and coach, Clinton worked at Minneola, Lincoln, and McPherson, where he taught physical education and social studies and coached basketball, golf, football, and track before retiring in 1990. After retiring, Clinton continued playing golf as much as possible with family and friends, reading, watching his KU Jayhawks play basketball, and listening to music, especially the Statler Brothers.

Clinton was an active member of the First Christian Church of McPherson, Kansas, serving as Chairman of the Board twice and as an Elder, and he taught the Young Thinkers Sunday School Class for many years, as well as being involved with the youth programs of the church. After 39 years in McPherson, Clinton and Donna moved to Sublette, Kansas, in 2001 to be near three of their grandchildren.

The most important things in Clinton's life were his family, friends, and faith in God. He stayed active after his retirement and developed a passion for yard work, which he insisted on doing into his late 70's. Health problems and age slowed Clinton down in his later years, but he met the challenges of his limitations with grace and lived by the philosophy of changing the things he could and accepting the things he couldn't change.

In lieu of flowers, memorial donations may be made in Clinton's name to Camp Hope Heartland, P.O. Box 1529, Great Bend, KS 67530 or in care of Stockham Family Funeral Home, 205 North Chestnut, McPherson, KS 67460. To send flowers or a memorial gift to the family of Herbert Clinton Brown please visit our Sympathy Store.

To send flowers to the family in memory of Herbert Clinton Brown, please visit our flower store.