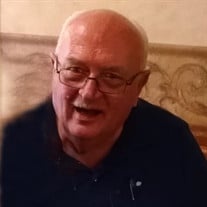 Harlan R. Hays, 70, of Greeley, CO and formerly of Lindsborg and McPherson, passed away on Tuesday, March 31, 2015, at Fairacres Manor in Greeley, CO. He was a retired funeral director and embalmer and had owned & operated Hays Funeral Home in Lindsborg, KS. from 1985 to 2000. He had previously been a director at Ball & Son Funeral Home in McPherson.

He was born on June 26, 1944, in Great Bend, KS, the son of Roy Frank and Olinda E. (Russman) Hays. He graduated from Hutchinson Community College and Dallas Institute of Mortuary Science. On April 10, 1970, Harlan was united in marriage to Wilma Y. “Willy” Rutledge in Eureka, KS.

Memorial donations may be given to Fairacres Manor (Greeley, CO) in care of Stockham Family Funeral Home, 205 North Chestnut, McPherson, KS 67460. To send flowers or a memorial gift to the family of Harlan R. Hays please visit our Sympathy Store.

To send flowers to the family in memory of Harlan R. Hays, please visit our flower store.