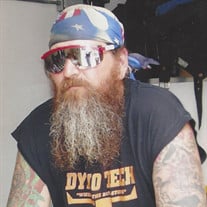 Harlan “Harley” Ray Eirick, 57, of Galva, KS and formerly of Grand Island, NE, passed away peacefully on Friday, April 21, 2017, surrounded by family at his home in Galva. He worked for United Towers as a truck driver and maintenance technician.

He was preceded in death by his father.

To send flowers to the family in memory of Harlan "Harley" R. Eirick, please visit our flower store.
Send a Sympathy Card