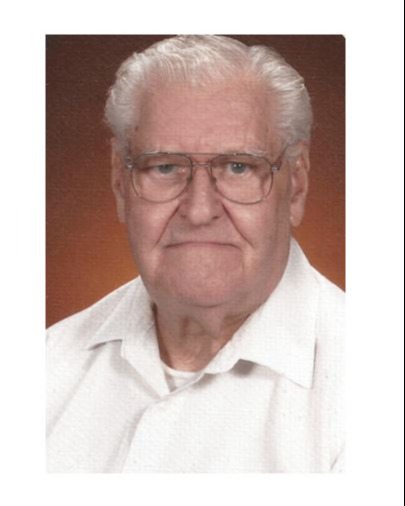 Gene was born at home on May 7, 1926, in Alder Branch, Anderson County, Texas, to Albert Allen Copeland and Lockey Belle (Marr) Copeland. He was the third of eight children.

In conversations several years before his death, Gene recounted some boyhood memories. During the Depression, the family lived on a farm located on the outskirts of Palestine, Texas. They ate what they grew. “One of our favorite dishes was egg noodles cooked in tomato sauce” made from tomatoes his mother canned. “We ate very little meat, just a little pork or a little chicken. Hogs were killed in the winter and sugar cured, smoke seasoned and salted so it could be eaten in the months ahead. My dad would say, ‘When the bacon got so rancid you couldn’t eat it, it was time to plant cotton.’ ”

Growing up on a farm, Gene learned a multitude of skills that would serve him throughout his life. He helped his dad in the field, worked with livestock and milked cows (his least favorite chore). With his mother, he helped raise turkeys and cultivate tomatoes, with proceeds from the sales used to pay doctor bills and other debts. As a kid, Gene most enjoyed what he called “riding the go-devil.” It was a little sled pulled by two mules that would help disk the dirt around the base of the plants.

Toward the end of high school, Gene moved to Palestine, where he worked at a small grocery store. He would arrive at the store before 7 a.m. to receive the bread delivery, then attend vocational-agriculture classes at school. He graduated from Palestine High School on June 2, 1944. On Aug.1 of the same year, he got a letter that said: “Greetings from the President of the United States, Franklin D. Roosevelt.” He had been drafted for World War II.

On Aug. 28, 1944, Gene began his military life. The Army Air Corps took him to Amarillo, Texas, for basic training and airplane-mechanics school. Upon completion, he shipped out to Gulfport, Miss., where he worked on B-29s on a production line. “I did the same job every day, all day: changed the No. 3 spark plugs in engines. It was very monotonous.”

Gene left Gulfport in September 1945. Even though the war was over in Europe and Japan, the country still needed troops. Gene reupped in the service and was sent to Kearns, Utah, where he got his first clue of what was to come. “I drew all winter clothes: parkas, winter boots, thick blankets.” His squadron was loaded onto an old excursion boat in Seattle, the David W. Branch. “The next morning, I woke up and was so sick I couldn’t hold my head up,” he said. After 21 days, he landed in Shemya, a small island in the chain of Aleutians far off the coast of Alaska. There, he lived in a Quonset hut embedded in the snow. He was initially assigned to work on airplanes, but his ability as a jack-of-all-trades took him all over the island. He was the squadron barber and movie projectionist; he was given a motor pool with a few trucks to look after; he distributed both the beer and liquor rations and occasionally cans of Campbell’s soup, coffee, crackers and cheese to get the men through wiliwaw storms that could last up to 10 days. “I did a little of everything,” he said. “We all went up there as PFCs, and me and a few others made sergeant within nine months.”

Gene’s enlistment ended on Oct. 30, 1946, and he returned to Palestine. There, he heard about oilman Sid Richardson’s plans to build a gasoline plant outside of Kermit, Texas, and applied for a job. When he was hired, his boss was Gaines “Smokey” Billue. In Odessa and Kermit, Gene was assigned to maintain instruments on oil wells across the Permian Basin, taking readings and changing charts on 300 different wells. “I liked the job – the idea that I was working and finally independent. Jobs were very scarce then.”

Gene worked for the Sid Richardson Co. until 1950, when he was called back into service as part of the Air Force Reserves. This stint would take him to Shreveport, La., where he was put on B-29 maintenance and also worked on RB-35s, small reconnaissance bombers. “Every casual plane that came in, I’d work on too—a B-36, an XC-99,” he said.

His stint was up on Oct. 30, 1951. “I went back to Kermit to get my job back, and I found out they had fired me [because] they were all mad at Billue!” The irascible Smokey had quit Sid Richardson to pursue his vision for “underground storage,” in which salt is dissolved deep in the earth to create caverns to store petroleum products. In the spring of 1952, Billue dispatched Gene to McPherson, Kan., to develop a method for creating caverns and storing fuels. “I worked in McPherson for three summers—’52, ’53 and ’55,” he said. During that time, Gene lived at the Warren Hotel and ate all his meals for less than $5 a day.

In 1954, Gene and Smokey Billue went to Gallup, N.M., to drill an experimental storage well underground in shale (instead of salt) for El Paso Natural. In Gallup, Gene met Betty (nee Carey), the woman who would become his wife.  “She was working at the El Rancho, where we were staying,” he recalled. “One of the drillers I knew said, ‘I know a gal you might like.’ So we went out. I was in Gallup a couple of three months until the weather turned cold.” When he returned to Palestine, Gene asked his sister to help him pick out an engagement ring, which was then mailed to Betty in New Mexico. Happily, Betty said yes.

Meanwhile, Gene went back to work for Billue in Tishomingo, Okla. “I told Billue I was getting married, and he told me not to. I insisted, and he took me to the Wichita Falls airport and handed me a ticket—which was my paycheck. I found out before I got on the plane that the ticket was absolutely worthless, so I had to buy my own plane ticket to Albuquerque and only had $16 left in my pocket. When I got to the train depot in Albuquerque for a ride to Gallup it was full. So I went around the gate through an opening in the fence. I didn’t get caught until toward the end of the trip, when the conductor asked me for my ticket. I said I only had $16 and he said that would do. When I got to Gallup, Betty said, ‘I’m sure glad you got here, because I was going to get married tonight—even if I had to marry the best man.’ ”

Gene and Betty were married in Clovis, N.M., and honeymooned at a motel owned by the same people who owned the El Rancho, where Betty had worked. “We got the bridal suite and a big bowl of fruit.” Shortly after, they moved to Wichita Falls, Texas, where Gene helped build a gasoline plant, earning $200 a month—“that’s all Billue was paying me.” In May 1956, Gene and Betty moved full-time to McPherson so he could work full time on underground storage. “Betty didn’t want to come at first,” he said.

In 1963, Gene quit his job with Billue and went to work for NCRA as a consultant at $1,000 a month. “We put in four wells, two big brine ponds, a whole bunch of pipeline and a whole bunch of manifolds. It took about six months.” After that, he was bored. “I’d sit in the office all day, every day—just sitting in case something went wrong.”

About this time, a friend persuaded Gene to buy Casebeer Company Inc., a salvage yard owned by John Casebeer. Gene renamed the business Copeland Supply, mainly bidding on oilfield salvage – taking pipe, breaking down oil derricks and hauling scrap metal that could be resold as a commodity. Gene also bought and salvaged metal from an Atlas missile base.

In 1974, Gene bought a building on Main Street in McPherson that formerly housed an auto dealership. Copeland Supply expanded, offering hardware, auto parts and a full-service steel-fabrication shop. It was located right next door to B & G Hardware (formerly Hawley Hardware), which was purchased in 1972 and independently operated by Gene’s wife, Betty.

Gene and Betty were also busy on the home front, with four children, Ron, Rick, Karan and Beth. Larry Brickey, who was Betty’s son from a previous marriage, lived in Arizona but had been a part of the Copeland home life as well. Larry’s son, also named Larry, lived with Gene and Betty when he was in high school. Likewise, Karan’s son, Alex, lived with his grandparents for most of his formative years.

Family was tightly woven into Gene’s civic life. He was a Sunday School teacher at First Baptist Church, board member of the local YMCA, and deeply involved in Boy Scouts, Webelos and DeMolay, a youth organization of the Masons and Eastern Star. A longtime Shriner, Gene appeared in countless May Day parades decked out in his fez driving a miniature Model T car.

As a member of McPherson’s Chamber of Commerce, Gene took about 40 trips with other men in the group to major U.S. cities. Over the years, he was honored three times: once as Man of the Year, once as Key Man, and most recently as the chamber’s Traveling Ambassador.

Particularly close to his heart was the Old Mill Museum in Lindsborg, Kan. As a board member, Gene helped with the museum’s finances, acquisitions and long-term growth. His key contribution was in the form of a steam locomotive (purchased for $1) that was painstakingly moved from Hutchinson, Kan., and reassembled in Lindsborg over the course of seven years. It now sits next to the train depot on the Old Mill grounds.

After about 15 years in business, Betty liquidated B&G Hardware. She died in 1994 at age 62 after an 11-year battle with breast cancer. In 2001, when Gene turned 75, he sold Copeland Supply and took on a new career: owner-director of the Pioneer Heritage Museum on Mulberry Street. With artifacts salvaged during his junk-dealing days, Gene set up displays of early life in rural Kansas. Hundreds of wrenches were mounted on peg boards; hog oilers, ice tongs, corn grinders and cast-iron tractor seats were among the highlights. Other artifacts included a dentist’s chair, surgical instruments and a barber’s chair.

Around 2005, Gene auctioned off his vast collection and sold his building to the proprietor of an auto-repair shop. But Gene held court nearby at an adjacent barn that he owned. (He moved into the barn full time in 2018.) There he hosted the Red Barn Coffee Club, where guests could enjoy hot coffee and warm peanuts while sitting in downright uncomfortable chairs.

Gene was preceded in death by his parents, brothers and wife, as well as two sons: Larry Brickey in 2015 and Rick Copeland in 2018. Surviving are his sister, Eleanor Browder of Huntsville, Texas; his son, Ron (Nancy) of Fort Worth, Texas; two daughters, Karan Rumple of Wichita, Kansas and Beth (Chuck) DeCarbo of Sunset, S.C. He also leaves behind numerous grandchildren and great-grandchildren.

The family will receive friends from 2:00 PM to 4:00 PM, Sunday, October 23, 2022, at Stockham Family Funeral Home.  The funeral service will be held at 10:30 AM, Monday, October 24, at Stockham Family Funeral Home.  Burial, with Military Honors and Masonic Rites, will follow at McPherson Cemetery. To view a live stream broadcast of the service, please click on the following link: https://evt.live/funeral-service-for-h-e-gene-copeland