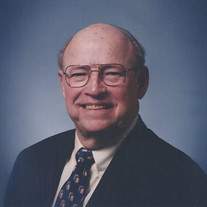 Glenn was born on November 9, 1925, in Logan, KS, to Rev. John Thomas Pyle and Harriett A. (Anderson) Pyle. He had a brother, Edwin, and two sisters, Maxine and Eleanor.

After high school, Glenn joined the U.S. Army Air Corps Cadet Division during WWII at Selman Field of Monroe, LA and graduated as a navigator for B24 Bombers in August of 1945. He met his future wife, Ouida LaVerne McDonald in Monroe, LA, where the two were married and then moved to McPherson, KS.

Glenn and his bride attended Central College and graduated from McPherson College, majoring in Public Education. He then attended Kansas University in Lawrence, KS and Emporia State College, where he received his Master’s degree in school administration. He taught elementary education and was a principal before becoming Assistant Superintendent of Unified School District 418, where he served for 20 years. He also served the United School Administrators of Kansas as the President and board member. He retired in July 1990, after serving the children of McPherson for 34 years.

He was preceded in death by his parents, wife, Ouida, brother, Ed Pyle, and two sisters, Maxine Brandt and Eleanor Pyle, who died at a young age.

Memorial donations may be given to Central Christian College of Kansas in care of Stockham Family Funeral Home, 205 North Chestnut, McPherson, KS 67460. To send flowers or a memorial gift to the family of Glenn D. Pyle please visit our Sympathy Store.

To send flowers to the family in memory of Glenn D. Pyle, please visit our flower store.