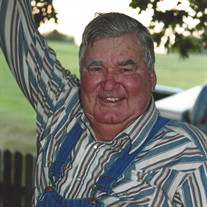 Glen Laverne Steiner, 80, of McPherson and formerly of Weatherford, OK, passed away peacefully on Wednesday, August 3, 2016, surrounded by family at McPherson Hospital. Glen served in the United States Army and was a former manager of Colorado Milling & Elevators in Weatherford and Chickasha. He also worked for Sawatzky Construction and owned & operated Steiner Construction.

Glen was born on September 16, 1935, in Weatherford, OK, the son of John Robert and Myrna M. (Schackleford) Steiner. He attended the local schools and graduated from Weatherford High School in 1954. On July 5, 1957, Glen was united in marriage to Bonnie R. Steigman in Ft. Sam Houston, TX.

Glen will be remembered as a helpful, giving person who was always willing to lend a hand to anyone in need. He had many friends, and he loved them dearly. He will be greatly missed by all who had the privilege of knowing him.

A memorial service will be held at 2:00 PM, Sunday, August 28, at the First United Methodist Church in Weatherford, OK.

Memorial donations may be given to First United Methodist Church in Weatherford, OK in care of Stockham Family Funeral Home, 205 North Chestnut, McPherson, KS 67460. To send flowers or a memorial gift to the family of Glen Laverne Steiner please visit our Sympathy Store.

To send flowers to the family in memory of Glen Laverne Steiner, please visit our flower store.
Send a Sympathy Card