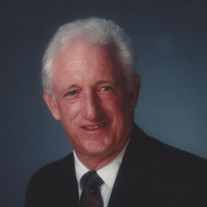 He was born in Wichita, Kansas, on August 8, 1932, the son of Glen E. and Okema (Wrenchey) Ball. Glen worked as a funeral director in Wichita and the family moved to McPherson in l945 to open a new funeral home. It became known as Ball & Son Funeral Home in 1955 when Eddie joined his father in the business. Glen and Eddie shared ownership of the firm until Glen’s death in l981. Eddie continued to run the business as the primary Funeral Director and Embalmer, until he sold the firm in 1996. He continued to work part-time at the funeral home for the next several years.

Eddie served his country in the U.S. Navy Reserve (Seabees) from l950 to 1960 and was honorably discharged at the rank of Builder 1st Class.

Eddie married Kathleen A. Russell on April 4, 1954, in McPherson. This union was blessed with two children, Jana and Sam. In 1982, he married Margaret A. “Peg” (Hobson) Ford. She had two children, Cris and Angie. Eddie later married Peggy (Martin) Stroup on October 10, 1993, in McPherson.

The visitation will be held from 3:00 PM to 7:00 PM, Wednesday, November 28, 2018, at Stockham Family Funeral Home with the family receiving friends from 5:00 PM to 7:00 PM. The funeral service will be at 10:30 AM, Thursday, November 29, at First United Methodist Church with Rev. Karen Rice Ratzlaff officiating. Burial will follow at McPherson Cemetery.

To send flowers to the family in memory of Glen Edward "Eddie" Ball, Jr., please visit our flower store.
Send a Sympathy Card