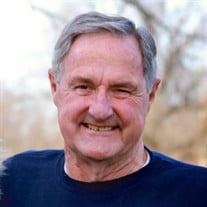 Gerald L. Pope, 77, passed away Friday, April 7, 2017, at his home in McPherson. Prior to retirement, Gerald had worked as a pilot for the NCRA Refinery.

He was born March 27, 1940, in Goessel, Kansas, the son of Earl J. and Fae June (Crumpacker) Pope. He spent his younger years in the Roxbury area and graduated from Roxbury High School in 1957. After high school, Gerald enlisted in the U.S. Navy and proudly served his country for the next four years. He was honorably discharged in 1962.

On November 24, 1962, he was united in marriage to Helen Mae Goertz in Goessel. They were married 29 years before Helen passed away on March 13, 1992. Gerald then met Marilyn Kay (Strella) Pauls and the two were married on January 9, 1993, in McPherson.

The funeral service will be at 10:30 AM, Tuesday, April 11, 2017 at McPherson Free Methodist Church with Rev. David Kessler and Rev. Tom Griffith officiating. Burial will follow in McPherson Cemetery. Visitation will be from 4:00 to 7:00 PM Monday at the church with the family receiving friends from 5:00 to 7:00 PM.

Memorial donations may be given to Outreach McPherson or the McPherson Free Methodist Church, in care of Stockham Family Funeral Home, 205 N. Chestnut, McPherson, KS 67460. To send flowers or a memorial gift to the family of Gerald L. Pope please visit our Sympathy Store.

To send flowers to the family in memory of Gerald L. Pope, please visit our flower store.