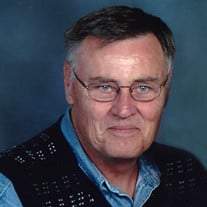 Gerald “Jerry” E. McGuire, 75, of Hutchinson and formerly of McPherson, passed away peacefully on Saturday, December 3, 2016, at Hospice House, Hutchinson. He was a division manager for Mid-America Pipeline Company in Conway, former Marion County Deputy Sheriff, and worked for Underground Vaults & Storage, Hutchinson.

He was preceded in death by his parents and grandson, Matthew Halsey.

The memorial service will be held at 10:00 AM, Friday, December 9, 2016, at Stockham Family Funeral Home, McPherson with Rev. Tom Mayse officiating. Inurnment will follow at Bean Cemetery in Little River, KS.

Memorial donations may be given to Hospice of Reno County in care of Stockham Family Funeral Home, 205 North Chestnut, McPherson, KS 67460. To send flowers or a memorial gift to the family of Gerald "Jerry" E. McGuire please visit our Sympathy Store.

To send flowers to the family in memory of Gerald "Jerry" E. McGuire, please visit our flower store.