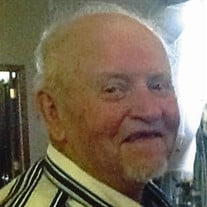 George D. Brown, 83, of McPherson, KS, passed away peacefully on Friday, September 22, 2017, surrounded by family at his home. He worked for Looney’s Truck Service, managed the Conoco Station in McPherson, and was a retired farmer.

George was born on July 16, 1934, in Ellis County, KS, the son of Clarence Phillip and Bertha Marie (Riedel) Brown. He attended Wickersham Grade School and graduated from McPherson High School in 1952, where he played football and the drums. He was a member of St. Joseph Catholic Church.

He served in the United States Army during the Korean War.

He was preceded in death by his parents and faithful Dalmatian dog, Ellie.

The funeral service will be at 2:00 PM, Thursday, September 28, 2017, at Stockham Family Funeral Home with Father Hien Nguyen officiating. Burial with Military Honors will follow at McPherson Cemetery.

To send flowers to the family in memory of George D. Brown, please visit our flower store.