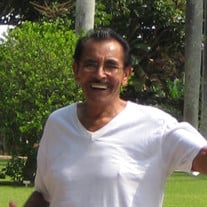 Genaro Acuna Hermosillo, Sr., 81, of Spencer, Oklahoma, passed away on Friday, June 10, 2016, at his home. He worked as a welder at Modern Products in Hesston, KS for many years.

Genaro was born on October 10, 1934, in Refugio, TX, the son of Jose De La Luz Hermosillo and Julia Acuna Hermosillo. He was the youngest of nine siblings. Genaro grew up in Munday, TX. On November 5, 1955, Genaro married Maria Estraca. Seven children were born to this union.

Genaro was very musically talented, playing six string, 12- string and electric guitar, accordion, harmonica, and tambourine in a Traditional Mexican band for most of his life. He also enjoyed ballroom dancing and after retiring and moving to the Oklahoma City area, he became a dance instructor and competitive dancer, winning many first and second place trophies and awards over the years. He attended Church on the Rock in Oklahoma City for over 25 years. He also became ordained in the work of the Gospel Ministry of the Deliverance Ministry Church in Oklahoma City in 1993.

He was preceded in death by daughters, Carmen Heckard and Mary Langfitt, and a great-great-granddaughter, Kora Huff.

A memorial service will be held at 10:00 AM, Friday, June 24, 2016, at Stockham Family Funeral Home with Rev. Lynn Scott officiating. Inurnment will follow at Mound Township Cemetery, Moundridge, KS.

Memorial donations may be given to Genaro Hermosillo Memorial Fund in care of Stockham Family Funeral Home, 205 North Chestnut, McPherson, KS 67460. To send flowers or a memorial gift to the family of Genaro Hermosillo please visit our Sympathy Store.

To send flowers to the family in memory of Genaro Hermosillo, please visit our flower store.
Send a Sympathy Card