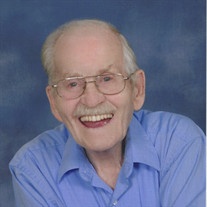 Garth L. Ellwood, 86, of McPherson, passed away peacefully on Monday, January 4, 2016, at The Cedars, McPherson. He was a retired sales representative and had worked in the newspaper advertising business, starting his career at the McPherson Sentinel. He was also a former National Advertising Manager for the Inland Valley Daily Bulletin in Ontario, California.

He served in the United States Army during the Korean War.

Garth was born on December 5, 1929, in McPherson, KS, the son of Virgil Odell and Leona June (Spear) Ellwood. He graduated from McPherson High School and attended McPherson College. He graduated from Kansas State University in 1955 with a Master’s Degree. He was united in marriage to Cara Lou Sheets on August 24, 1952. He married Vida J. (Kliewer) Schrag on June 6, 1998. She preceded him in death on November 14, 2009.

He was a member of First Christian Church, McPherson and McPherson Kiwanis Club. He was also a SCORE business consultant.

He was preceded in death by his parents, wife, Vida, and brother, Jim Ellwood.

The memorial service will be held at 11:00 AM, Friday, January 8, 2016, with Military Honors at the First Christian Church with Rev. Penny Ellwood and Rev. Lynn Scott officiating. A visitation is scheduled from 10:00 AM, Friday, until service time at 11:00 AM, at the First Christian Church. A private inurnment will be held at the McPherson Mausoleum.

In lieu of flowers, memorial donations may be given to First Christian Church or McPherson Senior Center in care of Stockham Family Funeral Home, 205 North Chestnut, McPherson, KS 67460. To send flowers or a memorial gift to the family of Garth L. Ellwood please visit our Sympathy Store.

To send flowers to the family in memory of Garth L. Ellwood, please visit our flower store.