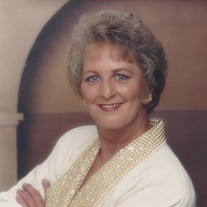 Frona Kay Nikkel, 71, of McPherson, passed away on Wednesday, August 26, 2015, surrounded by her family at Salina Regional Health Center, Salina, KS. She had worked at the NCRA Refinery, Kumle Feed Yard, and Overhead Door in McPherson.

Frona was born on September 3, 1943, in Ness City, KS, the daughter of Fred Lawrence and Emma Irene (Fercking) Coker. She graduated from Ness City High School. She was united in marriage to Richard L. Caruthers on June 22, 1963, in Ness City. She married Robert D. Nikkel on June 15, 1985, in Marquette, KS. He preceded her in death on September 19, 2009.

She was a life member of V.F.W. Ladies Auxiliary and was a member of Ness City Methodist Church.

The funeral service will be held at 10:30 AM, Tuesday, September 1, 2015, at First Christian Church, McPherson with Rev. Lynn Scott officiating. Burial will follow at McPherson Cemetery. Visitation will be held from 3:00 PM to 7:00 PM, Monday, August 31, at Stockham Family Funeral Home with family receiving friends from 5:00 PM to 7:00 PM.

Memorial donations may be given to Rebecca A. Morrison House at Salina Regional Health Center or American Heart Association in care of Stockham Family Funeral Home, 205 North Chestnut, McPherson, KS 67460. To send flowers or a memorial gift to the family of Frona Kay Nikkel please visit our Sympathy Store.

To send flowers to the family in memory of Frona Kay Nikkel, please visit our flower store.