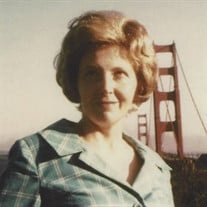 Francine was born on January 28, 1937, at Flowers Hospital, Tulsa, Oklahoma, the first child of Edwin Scott “Lefty” and Frances (Terry) Anderson. She grew up in Oklahoma, graduating from Holy Family High School in 1955.

She was introduced to Malcolm Frost by her mother, and although the last thing Francine wanted was another boy hanging around, she agreed to a date. They were married six months later! They were blessed with two daughters, Vicki Sue in 1957 and Karen Anne in 1961.

Francine worked for Dr. David L. Edwards, Jr. She was loved by all the patients who often brought her gifts from chocolates to steaks. She was described as being “her usual sunny self” and “much better suited to being a professional shopper!” She loved shopping and finding the perfect item always!

Francine and Malcolm were blessed with their first grandchild, Cory in 1976. She loved holding “tiny baby” as she called him and singing him sweet little songs! As he got older, she shopped endlessly for his favorite things, Grover pajamas, Oscar the Grouch shirts, and Star Wars action figures. She would have been so delighted to have known their second grandson, Christopher. He had beautiful red hair just like Francine’s grandfather.

Francine enjoyed cooking, going to cooking classes, and collecting many recipes to try. She often was found warming up the catsup for Cory’s dinner. Her response was “My goodness, he can’t have cold catsup on his warm food!”

She loved Christmas, finding the perfect tree, the largest most perfect one, which was decorated with collected ornaments, which is still tradition.

Francine loved San Francisco and the ocean. She would sit quietly for hours, watching the waves. The Tuck Box, an English tea house in Carmel, was a favorite tradition on vacations.

She was notoriously late!! Once describing a late present, “it will be like in Alice in Wonderland’s un-birthday present and un-Christmas present.”

Francine was a gentle, quiet, private, and reserved person. She held herself to a high moral standard and was true to her beliefs. Words cannot begin to describe how greatly she is loved and missed.

Francine will be laid to rest in a private graveside service alongside her daughter, Karen Anne Frost, September 16, 2016, in McPherson Cemetery.

To send flowers to the family in memory of Francine Frost, please visit our flower store.