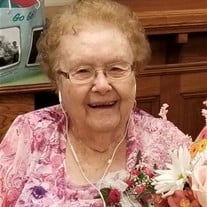 Eula K. (Harrison) Ham, 98, of McPherson, KS and formerly of Fort Collins, CO and Benkelman, NE, passed away peacefully on Saturday, January 4, 2020, surrounded by her family at The Cedars, McPherson. Eula was a homemaker, farm wife, and co-owner and operator of Lincoln Lanes, a bowling alley in Limon, CO.

She was a member of First United Methodist Church in Benkelman, NE and First Baptist Church in Limon, CO. Eula served her church and community in many capacities. She was also a member of Eastern Star.

A Celebration of Life service was held at 10:30 AM, Tuesday, January 7, 2020, at The Cedars Conference Center, McPherson.

A memorial service will be held at 10:30 AM (CDT), Saturday, September 12, 2020, at St. Francis Cemetery, St. Francis, KS. Dinner and fellowship/remembrance time will follow at the Benkelman United Methodist Church Fellowship Hall. Family and friends are all invited.

Memorial donations may be given to the McPherson County Humane Society in care of Stockham Family Funeral Home, 205 North Chestnut, McPherson, KS 67460. To send flowers or a memorial gift to the family of Eula K. Ham please visit our Sympathy Store.

To send flowers to the family in memory of Eula K. Ham, please visit our flower store.
Send a Sympathy Card