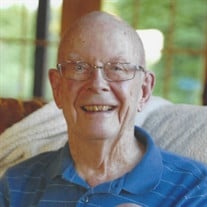 Elvin Glen Bacon, son of Glen and Beulah (Keffer) Bacon, was born on February 12, 1929, in McPherson, Kansas. He was the oldest of the three children in his family. On February 18, 2018, Elvin passed away at The Cedars and went to his heavenly home after a short battle with lung cancer. He was eighty-nine.

Elvin was married to Vivian Dickerson on April 17, 1948, in Cashion, Oklahoma. This union was blessed with two daughters, Jean LaVon and Diane Yvonne, and one son, Darrell Glen. He married Donna Keith on December 19, 1975, in McPherson, Kansas and added one step-daughter, Donna Kay, and one step-son, David.

He worked at Sid Bacon Motor Company as an auto mechanic and retired from N.C.R.A. Refinery where he worked as a pump mechanic. He also served four years in the National Guard. Elvin was a lifetime member of the McPherson Free Methodist Church and member of McPherson Craftsman for Christ.

Elvin was preceded in death by his parents; brother & sister-in-law, Dean and June Bacon; and step-son, David Keith.

Visitation will be held from 3:00 PM to 7:00 PM, Wednesday, February 21, 2018, at Stockham Family Funeral Home with the family receiving friends from 5:00 PM to 7:00 PM. The memorial service will be held at 10:30 AM, Thursday, February 22, at McPherson Free Methodist Church with Rev. Tom Griffith officiating. In accordance with the deceased’s wishes, his body was bequeathed to the University of Kansas School of Medicine. Inurnment will take place in McPherson Cemetery at a later date.

Memorial donations may be given to the McPherson Free Methodist Church in care of Stockham Family Funeral Home, 205 North Chestnut, McPherson, KS 67460. To send flowers or a memorial gift to the family of Elvin Glen Bacon please visit our Sympathy Store.

To send flowers to the family in memory of Elvin Glen Bacon, please visit our flower store.