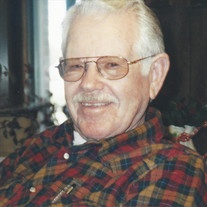 Ellis Hylton Gass departed this veil of tears, to be united with his Lord and Savior, Jesus Christ, on Sunday, June 3, 2018, at his home in McPherson KS, surrounded by family and friends. He was born on Feb. 21, 1926, in Ava, MO to Ramie Lee and Eula (Hylton) Gass. His mother passed away when he was six years of age. Ellis was united in marriage to Ruth Lena Burgin on June 19, 1949, at her parents’ home in Ava, MO. This union was blessed with two daughters, Sheila and Sheryl. He was a loving and devoted husband, father, grandfather, and great-grandfather.

At the age of 16, Ellis went to Illinois to work. After a short period of time, he took advantage of a government training program and learned to weld. He was a hard and conscience worker with a variety of skills. He worked at a foundry in Iowa and also as a welder for Boeing in Wichita, KS. The Boeing company transferred Ellis to Florida, and while en route, he and his family stopped in Mountain Grove, MO to visit family, at which time his father suffered a heart attack. This led Ellis to decide to settle in Mountain Grove. There, he worked for Brown Shoe Factory and Peterson Construction. In the mid 1970’s, he started driving a truck, eventually owning his own cab. He drove across the United States for 21 years, the last six years with his wife Ruth, as a team.

Ellis served his country in the United States Navy as a pipefitter on an LST-479, with most of his time being spent in the South Pacific. His ship transported troops to the Hawaiian Islands and had the honor of transporting Gen. Douglas McArthur at one time. He witnessed President Truman accept the surrender of Japanese government.

Ellis was a faithful Christian his entire life. He was a member of Church of the Brethren for many years, later becoming a charter member of the Christian Brethren Fellowship. In his final years, after moving to McPherson, KS, he and Ruth became members of Grace Evangelical Lutheran Church, LCMS.

Memorial donations may be sent to Grace Evangelical Lutheran Church, 800 E. First St., McPherson, KS or to the Alzheimer’s Association in care of Stockham Family Funeral Home, 205 North Chestnut, McPherson, KS 67460. To send flowers or a memorial gift to the family of Ellis Hylton Gass please visit our Sympathy Store.

To send flowers to the family in memory of Ellis Hylton Gass, please visit our flower store.