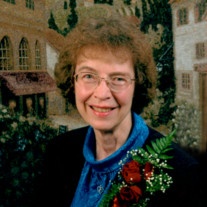 Eleanor C. Rudeen, 72, of McPherson, passed away Sunday, April 20, 2014, at McPherson Hospital. She was a teacher and team leader at Salem Public Schools in Salem, Oregon. She had been a McPherson resident since April 2013, moving from Salem.

She was born September 11, 1941, near Belpre, Kansas, the daughter of Eldon E. and Maxine A. (Pyle) Brandt. On February 14, 1960, she married Alvin E. Rudeen in Macksville, Kansas. Eleanor and Al had met while attending Central College in McPherson.

Survivors include: husband, Al of the home, a son, Robert Rudeen and wife, Pamela, of Italy, three grandchildren, Richelle and Larissa Rudeen of Eugeen, OR and Torin Rudeen of Princeton, NJ; and a brother, Eugene Brandt and wife, Ruth, of McPherson. She was preceded in death by her parents.

Memorial Donations may be given to Central Christian College of Kansas in care of Stockham Family Funeral Home, 205 N. Chestnut, McPherson, KS. To send flowers or a memorial gift to the family of Eleanor C. Rudeen please visit our Sympathy Store.

To send flowers to the family in memory of Eleanor C. Rudeen, please visit our flower store.