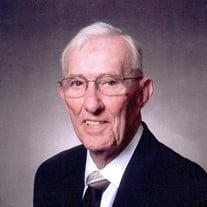 Eldon E. Folmnsbee, 89, of McPherson and formerly of Wichita, passed away peacefully on Tuesday, January 13, 2015, at Via Christi St. Francis Regional Medical Center, Wichita. He worked for Halliburton for over 40 years, retiring from the Wichita division office in 1987. Eldon served in the United States Army Air Corps during WWII.

He was a member of First United Methodist Church and volunteered at McPherson Hospital and for Meals on Wheels.

He was preceded in death by parents, wife, brother, Chester, Jr., and grandson, Andrew Christian Hudson.

Visitation will be held from 3:00 PM to 7:00 PM, Friday, January 16, at Stockham Family Funeral Home with family receiving friends from 5:00 PM to 7:00 PM. The funeral service will be at 10:30 AM, Saturday, January 17, 2015, at First United Methodist Church with Rev. Karen Rice Ratzlaff officiating. A graveside service will be at 1:30 PM, Saturday, at Temple Church Cemetery in Gypsum, KS.

Memorial donations may be given to First United Methodist Church or The Cedars in care of Stockham Family Funeral Home, 205 North Chestnut, McPherson, KS 67460. To send flowers or a memorial gift to the family of Eldon E. Folmnsbee please visit our Sympathy Store.

To send flowers to the family in memory of Eldon E. Folmnsbee, please visit our flower store.