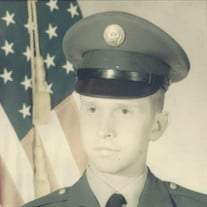 Earl was born on Monday, January 2, 1950, in Hastings, Nebraska, to Harley Clifford and Lois Josephine (Nelson) Otto, the ninth of nine sons. He grew up in Hastings, and graduated from Hastings Senior High School in 1968. He joined the U.S. Army after graduation, and served until 1976.

On July 19, 1979, he married Valeria Hughes in Platte Center, Missouri. They later divorced.

He worked for the City of Colorado Springs Fleet Services as a truck driver/equipment operator from 1984-2007.

Earl enjoyed the mountains: camping, hunting, fishing, and living on the land.

He was preceded in death by his parents, and four brothers: Yale, Lyle, Gene, and Kent.

Graveside services (with military honors) will be held at 2:00 PM, on Tuesday, February 28, 2017, at the Empire Cemetery, southeast of Galva, Kansas.

In lieu of flowers, a memorial fund has been established for the benefit of his daughter, Bonnie Otto, and may be sent in care of Stockham Family Funeral Home, 205 N. Chestnut, McPherson, KS 67460. Personal condolences may be sent to the family at www.stockhamfamily.com. To send flowers or a memorial gift to the family of Earl C. Otto please visit our Sympathy Store.

To send flowers to the family in memory of Earl C. Otto, please visit our flower store.