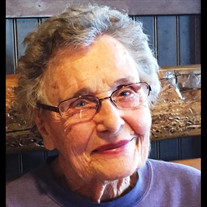 She was born June 17, 1926 on the family farm south of Artesian, South Dakota, the daughter of Frank Ray and Ethel Mae (Moorhead) Williamson. She attended Lyle School and graduated from Alexandria High School with the class of 1944. She attended summer school at Dakota Wesleyan University and received her teaching certificate. She taught one year in a country school near Mitchell, South Dakota, and after her marriage, another year in Faulkton, South Dakota.

Dorothy married Rueben Meyer on January 13, 1946 in Mitchell, South Dakota. They celebrated over 60 years of faithful marriage before he preceded her in death on May 26, 2006. She continued to live on her own, with the help of her children, for several years before moving in with family at age 91.

She was a devoted stay-at-home mother and helped her husband manage their family-owned garbage service and, later, motel and hotel businesses. She was a member of Abiding Savior Lutheran Church in Sioux Falls. Over the years, she led various ladies’ Bible studies and taught adult Sunday school classes. She was an auxiliary member of Gideons International, was involved in the Mothers of Twins Club, and enjoyed participating in bowling leagues with her husband.

She was preceded in death by her husband, her parents, sisters Doris Urban and Lois Morris, brothers Wayne, Frank, Jr., and George Williamson, son-in-law Dean Mundt, and granddaughter Sarah Mundt.

The family will greet friends at George Boom Funeral Home in Sioux Falls from 5-7 p.m. on Monday, March 4, 2019. Funeral services will be at 10:30 a.m. on Tuesday, March 5, 2019 at Abiding Savior Lutheran Church in Sioux Falls. Graveside service will follow at the Hills of Rest Cemetery. Memorials are suggested to Gideons International. To send flowers or a memorial gift to the family of Dorothy Mae Meyer please visit our Sympathy Store.

To send flowers to the family in memory of Dorothy Mae Meyer, please visit our flower store.
Send a Sympathy Card