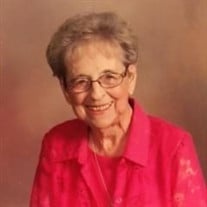 Donna LaVerne (Sims) Brown, 89, of Winfield, KS, died January 3, 2021. Donna was born on January 5, 1931 to Carrie Leona Anderson Sims and Ward Peter Sims in Minneola, Kansas. Donna was a “girly” girl who loved wearing pretty dresses, many made from flour sacks that were designed with flowers or cute patterns. She loved music which included playing the piano and then the trombone later on, spending time with her best friends Nannette Pitman and Betty Lou Sandidge, listening to her mother read stories in the evening, and teasing her older brothers.

During Easter break of her sophomore year at Southwestern College, Donna married her sweetheart, Clinton Brown, whom she had met at the “Toot N’ Tell’m” drive-in at Dodge City in the summer of 1949. Clinton was a basketball star at Pittsburg State Teacher’s College and after their marriage they remained inseparable for the next 64 years until his death in 2015, except for the year he spent serving his country in the Koren War.

After Clinton returned home, they moved to Iowa City, Iowa, before returning to Donna’s hometown where he began a career in education and they started a family. Over the next 35 years, they lived in Lincoln and McPherson as well as Minneola where Donna worked for Lincoln School and then accepted a job with People Bank & Trust in McPherson, KS, where she worked until 2001 as Loan Officer and the Board Secretary while he continued teaching and coaching.

Donna and Clinton were both active members of the First Christian Church in McPherson, teaching the Young Thinkers Sunday School class, serving as Elders in the church, and working with the weekly church youth programs. Once they were both retired in 2001, they moved to Sublette to be near to three of their grandchildren and following them as they crossed the state with stops at Columbus, Yates Center, and Colby. In May, 2015, Donna and Clinton moved to Derby where he was admitted to Westview Senior Living Center and she rented an apartment at the Greens, right on the Derby Country Club golf course. When Clinton died on July 15, 2015, Donna continued living there until she moved in with her son, Kevin, and daughter-in-law, Pam, at Winfield in December of 2019. She enjoyed living in Winfield, but the effects of kidney failure and years of dialysis were hard on Donna and she passed peacefully in her sleep on Sunday morning January 3, 2021.

The most important things in Donna’s life were her family, friends, and faith in God. She stayed active with women’s group through the Woodlawn Methodist Church in Derby, two book clubs as well as reading many other books, eating out with friends, spending time with her children and grandchildren, and promoting Camp Hope, the camp for kids with cancer that she started with the American Cancer Society in honor of her two children who died of cancer. “Ma Donna” was the director of Camp Hope for its first 18 years and has remained involved through the last 18 years as one of three Members Emeritus.

A memorial service and celebration of Donna’s life will be held at 1:00 PM, Saturday, June 12, 2021, at the First Christian Church, McPherson. Private inurnment will be in McPherson Cemetery. In lieu of flowers, memorial donations made be made in Donna’s name to KyMel, Inc., PO Box 1529, Great Bend, KS 67530; or in care of Stockham Family Funeral Home, 205 North Chestnut, McPherson, KS 67460. To send flowers or a memorial gift to the family of Donna L. Brown please visit our Sympathy Store.

To send flowers to the family in memory of Donna L. Brown, please visit our flower store.