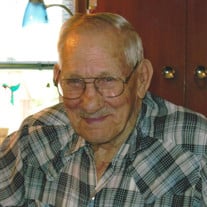 Donald Eugene Moyer, 87, of McPherson, KS, passed away peacefully on Monday, October 29, 2018, at Bethesda Home in Goessel, Kansas. Don retired as a meter reader from McPherson Board of Public Utilities after working there for 25 years.

Donald was born on September 22, 1931, in Solomon, KS, the son of Fred S. and Esther P. (Forney) Moyer. He graduated from Galva High School in 1954. Don was united in marriage to Mary Louise Ballweg on August 29, 1954, in McPherson, KS. This union was blessed with two children, Sheila and Mark.

Donald served in the United States Army during the Korean War from 1951 to 1953. He was discharged at the rank of Private First Class. He was a member of the American Legion Post #24 and V.F.W. Post #2715.

The funeral service will be held at 1:00 PM, Friday, November 2, 2018, at Stockham Family Funeral Home with Rev. Tom Mayse officiating. Burial with Military Honors will follow at McPherson Cemetery.

Memorial donations may be given to the American Legion Post #24 or Bethesda Home (Goessel, KS) in care of Stockham Family Funeral Home, 205 North Chestnut, McPherson, KS 67460. To send flowers or a memorial gift to the family of Donald E. Moyer please visit our Sympathy Store.

To send flowers to the family in memory of Donald E. Moyer, please visit our flower store.
Send a Sympathy Card