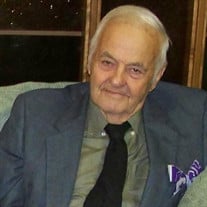 Donald P. Lisenby, 89, of rural Burrton, KS, passed away peacefully on Saturday, December 17, 2016, surrounded by family at his home. He worked as a printer at Duke Publishing and Rand Publishing in Wichita for many years, but his love was farming. He moved to Burrton in 1970, where he farmed until his death. He raised Milking Shorthorn Cattle.

Don was born on November 11, 1927, in Wichita, KS, the son of PJ and Augusta (Wilhelmina Reim) Lisenby. He graduated from North High School in Wichita, KS. On August 20, 1949, Don was united in marriage to Patsy J. Edmundson in Cherokee, Oklahoma. They were married for 61 years until her passing on April 13, 2010.

He was a member of Trinity Lutheran Church, McPherson.

He was preceded in death by his parents, PJ and Augusta; wife, Patsy; infant daughter, Denise; and brother, Duane.

Visitation will be held from 3:00 PM to 7:00 PM on Tuesday, December 20, 2016, at Stockham Family Funeral Home with the family receiving friends from 5:00 PM to 7:00 PM. The funeral service will be held at 11:00 AM, Wednesday, December 21, at Trinity Lutheran Church, McPherson with Rev. Tim Leaf officiating. A private burial will follow at Scott County Cemetery in Scott City, KS.

Memorial donations may be given to Trinity Lutheran Church, McPherson in care of Stockham Family Funeral Home, 205 North Chestnut, McPherson, KS 67460. To send flowers or a memorial gift to the family of Donald P. Lisenby please visit our Sympathy Store.

To send flowers to the family in memory of Donald P. Lisenby, please visit our flower store.
Send a Sympathy Card