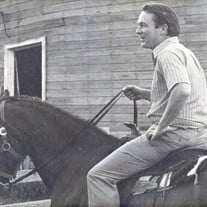 Donald R. Johnson, 87, passed into Peace Thursday, April 13, 2017. He was born to Anton Rudolph Johnson and Ethel Mae (Bergstrom) Johnson of Inman in 1930, growing up with brother Evan Rudolph, and sisters Glennis Mae and Lila Marie.

As a youth, Don loved playing with brother and sisters, cousins, and neighbor kids along with tending to the younger ones. He was very fond of caring for the farm’s animals, and eventually had a hobby farm where he taught his children that same love and responsibility. He often recounted the frequent fishing trips and otherwise being spoiled by his grandfather, Isaac Robert Bergstrom, who lived with them on the family farm. Don carried that love of fishing throughout his life.

Upon graduating, Don took a commission in the Air Force where he studied meteorology at the University of Washington for a year, prior to three years of service in Germany and France. It was during this year of study that he met and subsequently married Dorothea Marie (Christiansen) Johnson on August 26, 1953. During their time in Europe, Don and Dorothea traveled whenever possible, beginning a tradition that was one of their great joys as a couple. Don completed 20 years of service in the Air Force Reserve, retiring at the rank of Lt. Colonel.

After seven years of active duty service, Don pursued advanced degrees in meteorology at the University of Wisconsin – Madison and upon completing his PhD in 1964, he joined the faculty there. During that time, Don supervised 45 master’s degree candidates and 24 doctoral candidates. Don retired from teaching at the UW in 1994. He continued his writing, research at the UW, and active roles in earth sciences and education at the national level well into his retirement. His scientific collaboration with former students and peers, at the national level, and participation in international meetings afforded Don and Dorothea the opportunity to share their love of traveling together through much of his career.

Among other awards and distinctions, Don was elected a Fellow of the American Association for the Advancement of Science, and Fellow of the American Meteorological Society (AMS) where he served as President for a year, in 1992. He served as Chief Editor of the Monthly Weather Review and as AMS Monographs Editor. In 2010, he received the Award for Excellence in Earth and Space Science Education from the American Geophysical Union, and in 2016 he was named Honorary Member of the AMS.

The family requests that memorial donations be given to Lutheran World Relief, c/o Stockham Family Funeral Home, 205 N. Chestnut, McPherson, KS 67460. To send flowers or a memorial gift to the family of Donald R. Johnson please visit our Sympathy Store.

To send flowers to the family in memory of Donald R. Johnson, please visit our flower store.
Send a Sympathy Card