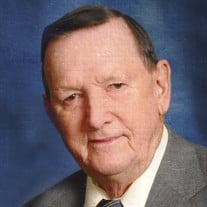 Donald R. Glahn, 84, of McPherson, KS, passed away peacefully on Monday, January 28, 2019, at The Cedars, McPherson. He was a retired computer programmer for Farmer’s Alliance Insurance Co., where he had worked for 37 years.

Don was born on July 8, 1934, in McPherson, KS, the son of Henry and Gladys (Vermillion) Glahn. He graduated from Roxbury High School in 1952. He also graduated from Central College and McPherson College. Don was united in marriage to Christine “Chris” J. Bergstrom on January 24, 1959, in Salina, KS. They just celebrated their 60th wedding anniversary.

He was preceded in death by his parents, brother, Dean Glahn, and sister, Glenna Olson.

To send flowers to the family in memory of Donald R. Glahn, please visit our flower store.