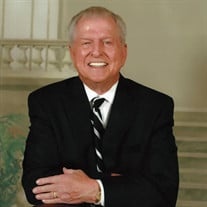 Dick was born December 19, 1928, in Blackwell, OK, the son of George Reiser and Evaline (Farrah) Hess. Dick grew up in the oil fields of McPherson County, working alongside his parents at their country store between Canton and Galva. As his father gradually shifted his focus from the store to oil production, Dick learned the business that would eventually become his own livelihood.

Dick graduated from McPherson High School in 1946 and attended the University of Kansas and McPherson College. He served four years in the United States Air Force during the Korean War and was stationed at Brize Norton Air Base in England.

Dick was a member of Trinity Lutheran Church. He was also an avid supporter of the arts, the McPherson Museum, and McPherson parks. He and Beverly were named the Kansas Governor’s Arts Awards Art Patrons in 2008.

He was preceded in death by his parents, first wife, infant son, Joel, and brother, James H. Hess.

A private graveside service will be held on Saturday, January 30, 2021, at McPherson Cemetery with Rev. Tim Leaf officiating.

Memorial donations may be given to McPherson Museum or Trinity Lutheran Church in care of Stockham Family Funeral Home, 205 North Chestnut, McPherson, KS 67460. To send flowers or a memorial gift to the family of Dick Hess please visit our Sympathy Store.

To send flowers to the family in memory of Dick Hess, please visit our flower store.